Today our journey has brought us to Pisa, home of the leaning tower. Although the Leaning Tower of Pisa is cool to see, there was something else that struck me as the most amazing part of Pisa. It’s quite shocking, but it was a street vendor.

Street vendors and beggars are everywhere that there are tourists. At the Paris train station there’s a handful of girls with signs that say their family’s been killed and they need money. At the Eiffel tower there are even more girls claiming to be deaf and mute with a note asking for money. Everywhere around the tower there are people selling miscellaneous tower gear, little toy dogs, anything that they can get their hands on that someone may possibly buy for themselves or their kid.

And this is just a list of the things in Paris, suffice it to say there’ve been many vendors everywhere touristy that we go. 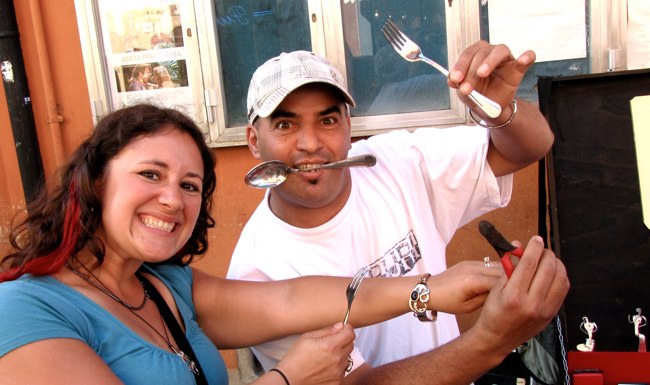 The interesting part is that ideas through the vendor circuit seem to spread. Eiffel tower replicas, paintings and the like are no surprise outside the tower, but flying helicopter lights? We saw at least 20 different people with these lights, which are attached to little helicopter blades that, after launched into the sky with a rubber band, fall slowly in front of unsuspecting tourists. The vendor then proceeds to try to convince the person that politely picked up the light that they want to buy it. (we never fell for any of the tricks, but we saw them happening everywhere)

This is basically the standard script for any street vendor, get their product in your hand and then ask for money. This happens with everything from necklaces to roses, but some things require an incessant “Madame, Madame” as one person sounded like he was stuck on repeat, trying to get the attention of one particular person who must’ve looked ready to buy.

A funny little thing happened to us at the Eiffel tower. We were walking through with a persistent vendor trying to get us to buy a tower replica for quatre (4€). He just kept saying “Quatre! Quatre!” as I was shaking my head no. Then he said something more, followed by the same “Quatre! Quatre!” so I politely replied “No thanks” and he instantly said, in English “Five! Five!”

So that’s the rundown of the typical street vendor, one of sometimes hundreds who are all selling the same thing in very close proximity of one another.

Here in Pisa it’s “Rolex” watches, in Venice it was handbags along with some apparent transplants from Paris with helicopter lights, and in Montmartre (Paris) it was Heineken in front of the main church (this had to be the strangest)

Although Pisa has it’s share of copycat vendors, there’s one who sticks out and does everything right. Walking down the main street that heads to the Leaning Tower we were greeted by several pizza places, a few traditional pop up shops, and one little table with bracelets.

Although they aren’t simply bracelets, they’re bracelets made out of forks. He has a very smart design, he takes spaghetti, fruit, and fish forks (3 distinct sizes, with 4, 3 and 2 tines) and shapes them into artistic designs, adds a hinge and clasp and voila! A bracelet. He’ll also attach your choice of stone.

His system, if you can call it that, is to be the nicest guy around. There was always someone at the table when we walked up so he was laughing and joking with them and generally sounding like someone that you wanted to be around, unlike the pushy vendors who were trying to work everyone over.

While attending to the customer he would greet anyone that came up and briefly show off his goods, not rudely stopping working with the current customer mind you, but politely attending to everyone.

The benefit of his product is that it speaks for itself. And if you had any question he had the original, unadjusted forks lying out on the table, a paper with his name and website, and social proof of his work with a full page article (with photo) about him clipped from a magazine. Everything to tell onlookers that he’s the real deal.

Then he just went over and above when it came to delivery of the bracelet. He places the stone in front of you, and in our case the specific bracelet that Marla had chosen had a slightly loose hinge so with his smiling happy tone he told her that he sadly couldn’t sell her that one because he doesn’t want anyone leaving and becoming unhappy if their bracelet ever broke in the future. Although he had an alternate one that was very similar. She liked it and everyone was happy.

After that he offered to engrave something into it. We wrote down “Jeff & Marla – Pisa 2010” and he quickly etched it in. Then being such a nice guy he also gave Marla a free necklace (also made out of a fork head), sizes her head with black twine, jokes that it’s good that she has a normal sized head and then ties it all up and puts it around her neck.

Before he takes the money he says, “When I say free, I mean free” alluding to the other vendors who put a necklace around your neck and then want money. So for 20€ we were leaving as very happy customers with both a bracelet and necklace.

But before we could leave he simply asks if he can have a photo for his website. He poses, see the fun picture above, stamps his URL on a piece of paper for us to keep, and we’re on our way.

He did everything right.

All in all it was of course cool to see the tower, but it may have been even more inspiring to have stumbled across this man who not only offered an excellent and unique product, but who is also an all around nice guy who knows how to sell it.

What have your experiences been like with street vendors or “toll collectors” (beggars) in the past? Let us know in the comments.