Spending 22 days working on the road proved to have unexpected challenges, but also great benefits. It’s time to weigh in on the results of the 22 day experiment in location independence.

END_OF_DOCUMENT_TOKEN_TO_BE_REPLACED

This is a new thing I’m starting on the site. Typically I try to write in a way so there’s something that you can learn from our experiences, but starting today (and every Thursday) I’ll be sharing a brief story from the road. No message, no lesson, no direction in particular, just a fun little anecdote about our travels.

Today’s story comes from the Paris to Venice overnight train.

END_OF_DOCUMENT_TOKEN_TO_BE_REPLACED


I started this blog to share and document the things that we learn in our travels, and there’s still much to share about Europe that we’ll write and post in the coming weeks. But beyond travel alone I think there’s things to share simply about living life to the fullest and this is one of those posts.

The point can be summed up in one sentence. Travel is exciting because of new experiences, but you don’t have to travel to have adventures.

END_OF_DOCUMENT_TOKEN_TO_BE_REPLACED

Being big on primal nutrition, one thing that struck me about London was the lack of protein and the major focus on grains, mostly breads. Obviously I expected Italy to be big on pasta but I just assumed that London and even Paris would allow for me to eat fairly similarly to how I do at home. But I was wrong.

END_OF_DOCUMENT_TOKEN_TO_BE_REPLACED

We utilize our iPhones to their fullest potential. We write our blog posts, take photos of bus and train schedules, take walking tours, keep up with our email and of course much much more. But without a doubt the most useful part of the iPhone while traveling is the GPS.

Too bad it doesn’t work in Italy.

END_OF_DOCUMENT_TOKEN_TO_BE_REPLACED

We’re currently in the third and final country of our trip and we have, for the most part, successfully navigated without a lick of French or Italian, armed with only our English and a pocket phrasebook for each language.

END_OF_DOCUMENT_TOKEN_TO_BE_REPLACED 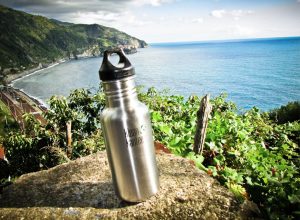 Other than my camera there’s just one thing that I bring with me nearly everywhere I go, my Klean Kanteen.

The issue I’ve run into in Europe though is that there’s no such thing as ordering tap water in restaurants.

END_OF_DOCUMENT_TOKEN_TO_BE_REPLACED


Today our journey has brought us to Pisa, home of the leaning tower. Although the Leaning Tower of Pisa is cool to see, there was something else that struck me as the most amazing part of Pisa. It’s quite shocking, but it was a street vendor.

END_OF_DOCUMENT_TOKEN_TO_BE_REPLACED

We arrived in Venice wide awake and refreshed after a brief 13 hour overnight train ride from Paris, got to our hotel, and started our day with a bang. Well that may be the standard plan and the 13 hour part is true, but the rest, well not so much.

Venice is a beautiful, unique city, but finding an address of an obscure, already booked place to stay is impossible.

END_OF_DOCUMENT_TOKEN_TO_BE_REPLACED

At home Marla and I draw a lot of attention to ourselves. Marla being 4’11” and me being 6’4″ is something that naturally turns heads. I’ve learned though that it’s less for the fact of our large difference in height and more for the reason that, standing next to her I look illogically tall.

Funny enough though height hasn’t been much of an attention grabber in Europe.

END_OF_DOCUMENT_TOKEN_TO_BE_REPLACED


Although it’s being posted much later, I’m currently drafting this on my iPhone from the bus that’s taking us back to Central London. We just left what’s the most exciting tour I’ve ever been on. Exciting may not be the best word but maybe I should say privileged. I feel extremely privileged to have had the opportunity to experience what we did in the way that we did.

Every once in a while you may discover an opportunity to take a normal, everybody’s doing it, experience and get insider access that very few others get. This was one of those experiences.

END_OF_DOCUMENT_TOKEN_TO_BE_REPLACED

Our time in London has come to an end and we’ve already moved on to Paris, but there’s still a bit about London that didn’t make it to the blog because of the lack of internet access. So here’s the first bit about getting around London.

Upon arriving to LHR we were immediately informed that the Underground workers were on strike. There was a disappointed sigh from the plane before the captain went on to explain the other modes of transportation out of the airport, the Express and the Connect (standard above ground trains).

Not being familiar with the Underground it made no difference to me that it would be out of service, but now that the strike is over I fully understand the disappointment.

END_OF_DOCUMENT_TOKEN_TO_BE_REPLACED


No one would question that I take a lot of photos (40,000+ in iPhoto right now), but I’ve always wanted to get more into video. The problem is that I’ve never taken it further than simply a want. This trip I resolved to change that.

END_OF_DOCUMENT_TOKEN_TO_BE_REPLACED

I’m a minimalist at heart, so I’ve been digging Rolf Potts’ No Baggage Challenge. He’s currently traveling around with just ScotteVest clothing (a sponsor) and the bare essentials, cleaning his clothes nightly and blogging from a bluetooth keyboard connected to his iPhone. If I ever dreamt about carrying luggage, that would have been the dream.

We’ve yet to truly vagabond and go on extended long term travel for months at a time so we still consider 22 days in Europe a fairly long term trip. Despite this I’ve still stuck to my policy of bringing just a single carry-on sized bag.